Talking to a German friend-Alex

Talking to a German friend-Alex

Chunyan Youxue is an educational activity, during which teachers and students head for the real nature and society with the focus training students’ ability of observing, problem-solving, communicating, coordinating and practicing social responsibility. That is studying while travelling, making ourselves grow up as well as doing good deeds to other people and community.
Now let’s share our stories
25th July
Talking to a German friend—Alex 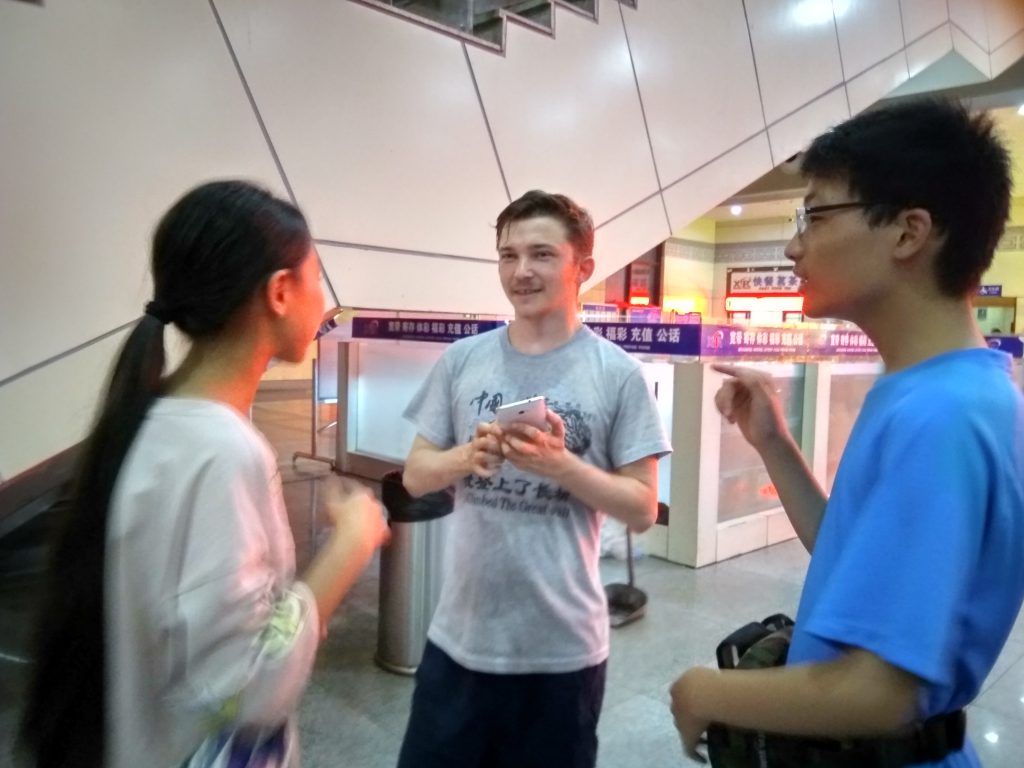 We got out of the cool island, air conditional room, and dipped into the hot air ocean. Temperature in Huaian(a north city in Jiangsu Province, China) was so high that everyone was sweaty in the street.
The boy was sent by his mother and younger brother, and the girl by her father. Other two, Chunyan and Chunyan’s mother, whose name is xiuzhen, came together with a friend—Alex, who had just finished his Huaian short trip and went back to Beijing that night.
Collected the ID card from everyone, except the girl whose certificate is residence booklet, picked up the tickets, said hello to each other, we talked to Alex, who is from Germany and now studying in Peking University with the major Manderin.
The children asked:“What are the interesting places in Germany?”“Is there any mosquitos in Germany?”“What do you guys usually eat?”“Do you German people have summer vocation and what do you usually do at your leisure time?”
After patient answers, Alex returned:“what kind of games do you Chinese kids play?”“What colors do you like?”“What subjects do you prefer?”
They enjoyed their delighted times with grins and giggles among them all the time.
Time was short, we had to get on train to Haerbin(the capital city of Heilongjiang province )at 20:17 and Alex’s train was at 21:31.
Having a natural conversation with a stranger is a challenge for children, which is also a good way to boost their courage and the ability to communicate, especially in the circumstance where your mother tongues are different and have no proficient common languages. Do you have the patience and wisdom to express your idea? Do you need to use your body language flexibly?Talking to a foreign friend was also a good way to enrich our global view, resulting in an unforgettable memories during Chunyan Youxue.The children showed their hospitality and friendliness. They enjoyed their differences and gave respect to each other. The children also realized they would make much more endeavor on learning English so that Chunyan doesn’t have to be the translators later.

From the day we arrived in this universe…… 野芳發而幽香，佳木秀而繁陰^_^